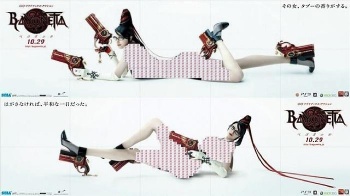 Bayonetta's Japanese launch is right around the corner, and Sega's marketing machine is on the warpath with these ads found in Shinjuku featuring the eponymous main character wearing fliers for the game that can be pulled off.

Imagine if you were hanging out in Shinjuku Station (the busiest train station in the world, according to the Guinness World Records) when you happened across the Bayonetta ads you see here. Each of the ads is six feet long, and features an image of the game's main character (also named Bayonetta) in an alluring pose. That's nothing new, right? Sex sells, after all.

What is inventive - and actually kind of cool - is that Bayonetta's body is covered with tiny little fliers that can be peeled off with information that allows the user to access a special Bayonetta cell phone site, presumably to get gamers pumped for the Oct. 26th release date.

While there's no way to tell what she's got on under the fliers, the bare skin on her arms and legs and the phrases on the ads - "This women, she's the scent of taboo" on the top and "If you didn't peel it off, it would have been a peaceful day" on the bottom - lead us to hazard a guess that she isn't wearing much. But if horny Japanese gamers are going to see it, they've got to take all the fliers off! Which means that they need to get all their friends to take a flier apiece, which means free advertising for the game.

Or, barring that, they could just pull all of the fliers off and dump them in the garbage. Combined with the fact that it probably took a while to put all the fliers on the poster in the first place, I don't know if this ad was the greatest idea. Cool, yes. Practical ... maybe not so much.

Bayonetta, by the way, received a perfect 40/40 score in major Japanese game mag Famitsu earlier this week. Wonder how that'll impact sales when it comes out next Monday.