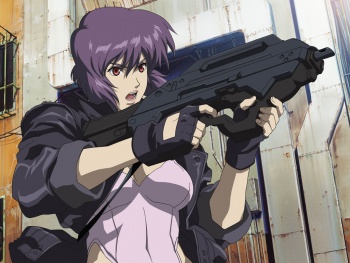 The seminal manga/anime Ghost in the Shell is getting a live-action, English-language remake courtesy of Bionic Woman writer Laeta Kalogridis.

Laeta Kalogridis, who penned the cancelled remake of the Bionic Woman, has been handed the scriptwriting reins for the live action version of Ghost in the Shell, the rights to which are currently owned by Dreamworks.

Along with Kalogridis, Avi and Ari Arad, who were the executive producers of Spider-Man, Fantastic Four and Iron Man, have signed on to produce the movie, which will be in 3D. It's not clear yet which version of Ghost in the Shell is getting adapted, but my money is on Mamoru Oshii's 1995 movie rather than Masamune Shirow's original manga.

Of course, the real fun part is trying to guess who they are going to cast in the various roles. Maybe if we all wish really hard, we won't get another DragonBall Evolution.