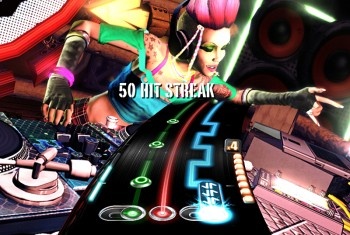 Activision may be trying to temper expectations for DJ Hero but analyst Doug Creutz says the game will probably still fall well below those unusually modest predictions.

Despite huge amounts of pre-release hype, RedOctane co-founder Kai Huang said over the weekend that he didn't expect the upcoming DJ Hero to make a fast break out of the gate. Rather than looking for big sales at launch followed by a major drop-off, Huang said Activision believed the game would build up momentum over time as people become more familiar with what a DJ game is.

But according to Cowen & Co. analyst Doug Creutz, Activision's sights may still be set too high. "On DJ Hero, despite some recent positive comments from company management about pre-orders, we remain very cautious about the title's prospects at launch," Creutz said in an investor's note. "A survey of online retailers indicates a demand profile that is well below what we would have expected to see just a few days before launch for a title that was destined to be a big (or even modest) success."

The high price of peripheral-bundled music games will put a lot of gamers off during times of recession, Creutz said, while the "buzz" surrounding franchises like Guitar Hero has also faded. As a result, he has dramatically cut his predictions for DJ Hero sales over the final three months of the year from 1.6 million units in the U.S. to only 600,000, while he expects full-year sales to reach 950,000 units rather than his initial estimate of 2.5 million.

While Creutz thinks that DJ Hero will be a much slower starter than Activision admits, he agrees that it will likely become an important fixture in the publisher's stable. "We still believe that DJ Hero will be an important part of Activision Blizzard's music franchise strategy, but we think it may take a few versions of the game for it to reach its full market potential (similar to the original Guitar Hero)," he noted. And it's not just DJ Hero that's suffering: After a rough September, Creutz cut his 2009 combined sales estimate for DJ Hero, Guitar Hero and Band Hero by more than half, from $408 million to $199 million.