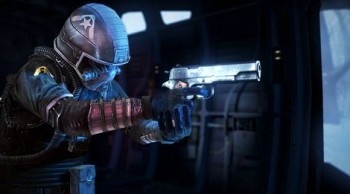 Insomniac community manager James Stevenson says that despite a more favorable critical reception to Resistance 2 than that of the first game, the company was stung by their fans' apparent belief that the game "was a failure."

For better or worse, it may be the game critics who determine a game's Metacritic score, but for developers, it's the fans who buy your games and are enthusiastic about the community. That's why, Insomniac's senior community manager James Stevenson, told Videogamer Resistance 2's superior review scores compared to its predecessor didn't counterbalance the disappointment the company saw amongst its devoted fans.

"The hardcore fans of Resistance 1 were maybe a little bit disappointed. Those folks consistently expressing that - especially [NeoGAF] - it was like your dog turned on you," Stevenson elaborated. "That's the feeling of it. You had this dog that loved you. You loved the dog, too, but they expressed all this affection for you. And then suddenly the dog bites your hand and it's that feeling of, ooh, ow, that really hurts."

True, the reviews might have been better - and the game sits at a not-shabby-at-all 87 on Metacritic - but their opinion doesn't matter quite as much, says Stevenson. If a reviewer dislikes a game, that's all right, since reviewers play "lots of games. They're supposed to be critical." But fan reception is a different thing entirely.

"But the people who put their money down on our game, want to see our game be good and want to invest months of their time into our game, spend months of their time leading up to our game watching videos, reading about it, sending us questions, listening to our podcasts, investing hours and hours and being excited for our game, if they're disappointed then it hurts more than some reviewer being pissy about a game and giving it a seven, well, okay, whatever. I can move on from that. I can ignore that. But fans that are genuinely disappointed are a lot harder to cope with."

I can see his point, true. But on the other hand, is a game doesn't live up to the fans' hype really a "failure," even in their eyes? I think that word has stronger connotations than he might mean.