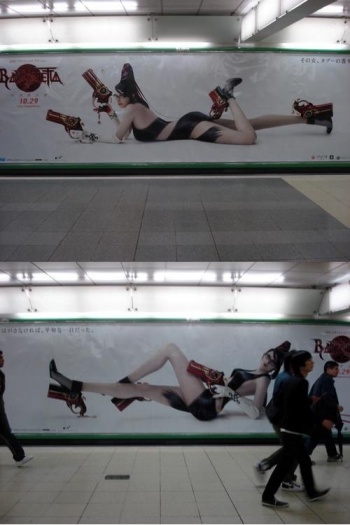 Remember those innovative ads for Bayonetta that asked passers-by to strip flyers off the wall to uncover a portrait of the game's heroine? Well, they've already been stripped.

Back on Friday, we wrote about some interesting posters found in Shinjuku Station in Japan advertising Sega's upcoming Bayonetta. The posters featured the game's lead character in a presumably sexy pose, but her body was covered by leaflets advertising a site for the game - to see the figure underneath, people would have to take the fliers.

Well, it's been a bit over a weekend, and the fliers have been completely stripped. That was fast, though not surprising - one has to wonder if this was the work of a few people just taking large bunches of fliers at once, or if multiple people actually took a single piece at a time. It's a rather clever and unique ad campaign, but it's hard to see it being a particularly effective one.

As expected, Bayonetta isn't quite naked, but she's close. I suppose there are advantages over having clothing entirely made out of your magical hair, but think about it: Wouldn't cleaning that stuff be a bitch?