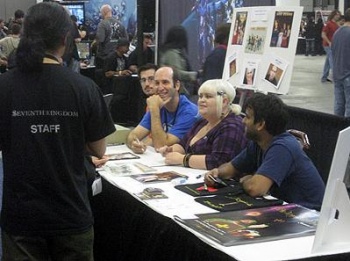 Did you miss out on The Escapist taking Philadelphia game conference GameX by storm? No worries - these pictures will make you feel like you were there on the show floor with us!

If any of you have ever been to a convention, you know that you should never attend one of them without a camera handy. Not only is it great for taking pictures of guys dressed like Princess Peach, but you'll never know when you'll want to show off the experience for everybody else.

Thankfully, former IGDA head Jason Della Rocca - invited to GameX as the opening keynote speaker - did just that, and posted the whole gallery to his blog. There's stuff from just around the show floor (and I do have to agree that the Dante's Inferno booth was probably an odd choice to put next to the entrance where all the families and children would come in) and then there's some Escapist-specific stuff as well.

For example, have you ever wanted to see Yahtzee in a bumper kart being chased down by the guy who played Dante in Clerks? What's that, you say - it's never occurred to you?

Well, let's rectify that, then.

The full set of images can be found on Mr. Della Rocca's blog, Reality Panic.

GDC 2014: 26 GDC Attendees Tell Us What They Learned - in Pictures Devin Connors 10 Comments