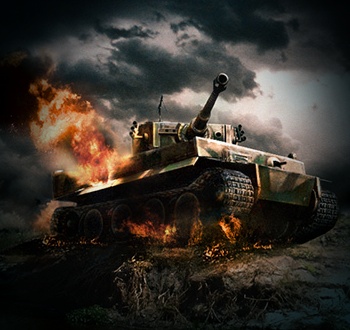 Best Way's Men of War excels in its ability to spotlight the individual soldier in an otherwise crowded genre.

Real-time strategy games are known for their all-encompassing, top-down, mastermind view. Battles are frenetic, with an overwhelming amount of action happening on the screen between massive clashing armies. It is easy to lose sight of what each soldier does to win those battles. But as Jim Rossignol shows in issue 226 of The Escapist, the genius of Russian developer Best Way's Men of War is its spotlight on the heroics of lone soldiers on the field of battle.

In Men of War, there are still troops and battalions but, at any time, you can "zoom in" to control the actions of a singular soldier or tank almost as if you were playing a third person action game. The level of detail is staggering. The game actually tracks the inventory each soldier is carrying, to the point where if a rifleman runs out of ammo or uses his last medkit, he can loot his fallen comrades in order to still be effective.

My attempt to free a village from Nazi-aligned troops came down to a single machine-gunner who was able to flank and gun down a group of enemy cannoneers. After killing perhaps a dozen enemy crewmen, he was spotted by an enemy vehicle. I tried to run for cover, but a single bullet clipped him, knocking him to the ground. Wounded, he crawled into a ditch, only to be found by enemy soldiers as he desperately tried to patch himself up. They gunned him down. I sat up out of my chair screaming: "He's a tiny frickin' hero!"

Men of War is far from perfect, but sometimes the innovations of a little-known Russian developer is just what's needed to fertilize a fallow field. Sputnik anyone? Read the rest of A View From the Trenches and let us know what you think.