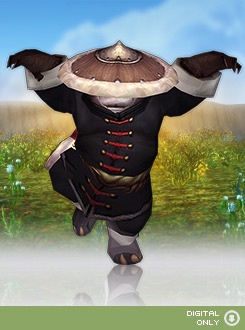 The announcement that Blizzard would be opening an online store for special WoW in-game pets has some members of the community bouncing off the walls.

Yesterday evening, Blizzard announced the opening of the World of Warcraft Pet Store, a place where players could acquire special in-game pets if they were willing to shell out their cash. At the moment, there are only two pets for sale in the store: Lil' K.T., the Littlest Lich (who will zap nearby Critters and laugh maniacally when you kill a player in PvP) and the Pandaren Monk.

Both pets were priced at $10, though half the proceeds of every Pandaren Monk sold through the end of the year would be donated to the Make-a-Wish Foundation, a non-profit organization that helps grant wishes to children with life-threatening illnesses and conditions. This wouldn't be the first time that the popular PC developer had worked with the charity organization, either - back in May 2007, 10-year-old Ezra Chatterton used his wish to visit the Blizzard offices, meet the developers and design his very own quest.

Predictably, the announcement was greeted by some members of the WoW community with proclamations that this was the beginning of the end, like every other change the company has made to Warcraft since the game launched in November of 2004. A quick look at the first page of the WoW General Discussion Forum - not that you should ever read the WoW forums, but in case you were really, really curious - reveals dozens of topics discussing the Pet Store, and how these two microtransaction-only pets are an indicator that within six months Blizzard will be letting you buy a level 80 character with full epic gear right from the get-go.

In case you couldn't tell, I think that the outrage is a bit silly. I'm okay with the idea of microtransactions in general, but the real kicker here is that this isn't anything Blizzard hasn't done before - it's just being more transparent about it now.

WoW and both of its expansions all had collectors' editions which were more expensive than the "vanilla" versions, and which came with special in-game pets. Even the Warcraft Trading Card Game has been doing something exactly like this with its rare loot cards that get you exclusive in-game items if you're lucky enough to find one (or have the cash to burn on eBay). People who spend the money to go to BlizzCon - or who ordered the Pay-Per-View stream - got exclusive pets there, too. Blizzard has been offering vanity pets for cash since the game came out, and we're no closer to "buy your epics with real money" now than we ever were.

All this is doing is really just eliminating the middleman and cutting away the extraneous stuff surrounding the acquisition of those aforementioned pets. At least with the Pet Store, you won't have to waste time and money buying godforsaken TCG booster pack after booster pack hoping luck will be on your side this time.

Besides, that Lil' K.T. is just adorable. How could you say no to that lovable, horrifying undead visage?