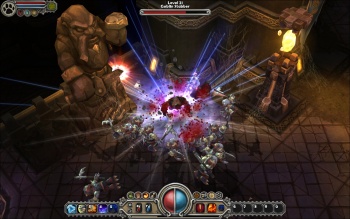 Every now and then, a development studio needs to know its limitations - a lesson that Torchlight developers Runic Games learned all too well.

Earlier this week, I sat down (so to speak) with four members of the Torchlight development team - Runic CEO Max Schaefer, President & Lead Designer Travis Baldree, Art Director Jason Beck and Zombie Pyrotechnician John Dunbar (yes, that is his actual job title) - to chat about the game's development and launch. Now, if you're one of the people who's picked up Torchlight since it came out last Tuesday, you know that the folks at Runic certainly know how to make a damn good game, but in some respects, it's because they've seen how to make a failure, too.

Runic was founded last August out of the ashes of Flagship Studios after the studio's, um, flagship title Hellgate: London tanked, forcing the developer to close its doors. Though the 17 founding members of Runic had been working on Flagship's other title Mythos, they were still close enough to the problems to see what went wrong.

Hellgate "wanted to be too many things for too many people," said Schaefer, pointing out that the game had been trying to push the envelope on several fronts including new pricing plans and early adoption of DirectX 10. With Torchlight, then, the team knew that they had to "focus on what we were doing, and a simpler path to where we're going, not take off gigantic bites that are more than we could ever chew."

In fact, their own team had been on the verge of making the same mistake with Mythos, said Baldree: "The development of that game was contorted and protracted, and like Hellgate it tried to be a lot of different things for a lot of different reasons ... [Torchlight] is what Mythos should have been. Maybe it's what Fate and Diablo I should have been." Having taken those lessons to heart, the Runic team vowed to focus on what they knew their 27-man team could do, and do well: Make a smooth action RPG.

Though the decision to focus their energy on an enjoyable single-player experience and save their multi-player focus for the upcoming Torchlight MMOG has been seen by some as a blemish in an otherwise gleaming gem, this philosophy seems to have worked out well for the Torchlight team: Though they haven't yet received sales numbers from their distribution partners like Steam (since those are only reported at the end of the month), the internal numbers that Schaefer & Co. are seeing have made the team "very pleased where it's going now."

Thanks to the Runic's small size and small advertising budget, most of the sales have been driven by word of mouth, which is something that the team was counting on: "Twitter was (and is) certainly our friend," chuckled Baldree. Thinking small may have helped Torchlight here, too: A tightly-focused game with a small development budget means that it's less risky for a publisher to fund, and at $20 it's easy to purchase on impulse if, say, you hear about it from a friend.

"We could have sold copies for more, but I think that $20 was the right price," Baldree said. "It lets us recoup our expenses, and it's sort of a 'magical' price where people can just make the buy without having to fret so much. If their friends tell them, 'Hey, this is a great game,' they can make the decision then and there. It's the cost of a DVD; it's the cost of a large pizza."

In fact, even if you picked up Torchlight and ordered a large pizza to eat while playing the game, you'd still be $20 under the price for a typical Xbox 360 or PS3 game, Baldree pointed out. Schaefer agreed, predicting that the industry would start seeing many more games made on a smaller budget by smaller teams for lower prices: "You have a really neglected area here between casual and big-budget games, and I think you'll see people rushing to fill that space. Plus, it doesn't take four years to develop - Torchlight took us 11 months."

It's easy to read that last bit as an affectionate jab at Schaefer's former employer Blizzard Entertainment, a studio known for its glacial development pace and currently working on the third installment of the series he helped create, but it's probably not. After all, there's still room in the market for big-budget AAA titles like Diablo III: "I don't doubt [Diablo III will] be fantastic. They won't release it if it isn't a first-class game, and I'll be a day-one purchaser."

Sounds good to me, Max. Me too - but in the meantime, there's plenty more Torchlight to play.

(To read more about the development of Torchlight and the upcoming MMOG Torchlight Online: The Burninating (...read it, you'll understand), check out the full Runic Games interview over at our sister site WarCry!)