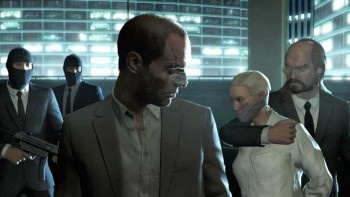 Great news for gamers who thought Kane & Lynch: Dead Men was just a couple wangs short of greatness: Word has it that the sequel will include a level in which our two protagonists run around completely in the buff.

Many Kane & Lynch reviewers complained that while the the game offered engaging characters, pulse-pounding action and an intense, tightly-wound plot, it ultimately felt short thanks to a pronounced lack of peen. In response, Eidos has apparently upped the ante with the inclusion of an entire level in which both Kane and Lynch will run around completely nude.

The pair end up in the altogether, so the story goes, because "in the previous level they get ambushed and are about to get sodomized." One can only assume that an incompetent gimp will figure largely in their escape.

Kotaku says the report comes from a "regularly reliable tipster," although Eidos has yet to comment. A much-less-reliable rumor that Eidos has brought in an elite team of Japanese boob-jugglers to assist with the implementation of the new, cutting-edge wang flapping technology also remains unconfirmed.