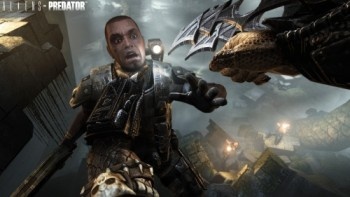 Sorry, Germany, but Sega has apparently decided to save itself some hassle by just not bothering to release Aliens vs. Predator in your country when it comes out next year.

Sega is apparently concerned that the high levels of violence in the game will keep it from being rated by the Unterhaltungssoftware Selbstkontrolle (USK), the German videogame rating agency. The publisher doesn't want to disrupt the "coherence" with the Alien and Predator brands by modifying the content to fit USK restrictions, so rather than going to the expense of having the game translated and localized for Germany it has decided not to release it in the country at all.

German site PC Games Hardware says the move is "unexpected but not surprising" given the level of violence expected in the game and the fact that a USK rejection would almost certainly mean Sega would lose money on a German release. Sega will presumably still submit the game for consideration in Australia, another country notorious for refusing to classify violent videogames, because a translated version won't be necessary.

At this point, PC Games Hardware is the only site reporting on this announcement; we've dropped a line to Sega Europe for official confirmation and will update once we have it.