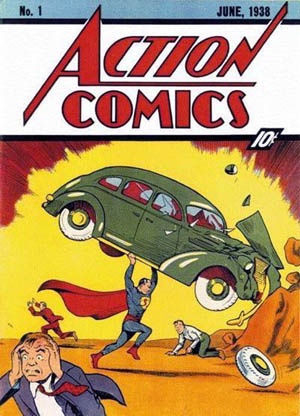 The comic book, once thought of as a devil worshiping tool, may not be so terrible for the nation's youth after all.

Professor Carol L. Tilley from the University of Illinois has determined through research that comic books are "just as sophisticated as other forms of reading ... [and] that children benefit from reading them at least as much as they do from reading other kinds of books." Score one for the good guys. Time to trot out the nation's youth to their local comic shops, assuming that they're actually lucky enough to have any nearby that are still in business.

Though details of Tilley's study were not given, she apparently had children read comic books and discovered that their vocabularies increased along with their love of reading. Though some criticize comic books as being a simplified form of actual books, Tilley believes: "If you really consider how the pictures and words work together in consonance to tell a story, you can make the case that comics are just as complex as any other kind of literature."

The word "comic" itself could be part of the reason comic books are criticized, giving the medium a child-like connotation. Comic books are anything but, especially these days with the average comic book marketed more towards adults than children. Manga could be an exception, though many series have mature content not meant for kids.

Many 21st century comic books are immensely more sophisticated than what the general public probably thinks of when they hear the word "comic." Even high profile writers such as Stephen King — with The Dark Tower and The Stand — and Phillip K. Dick — with Do Androids Dream of Electric Sheep? — have had their works adapted into comic book form. Please, just don't ever show Tilley a copy of The Boys.

Back to the main point of this article: comic books are actually good for children! I myself could be living proof of this, having read tons of comic books as a youth, from Superman to Punisher 2099 to Alf to The Hugga Bunch. I even still own a prized copy of the Kool-Aid man comic. I was always an above average reader, and had an above average vocabulary as tested; could this have been due to all the comic books I read? The answer is yes, so if you have kids I recommend that you go get them hooked on The Walking Dead, Blackest Night, or Dark Reign right away. Or, find something more appropriate for their age group, if you really need to.