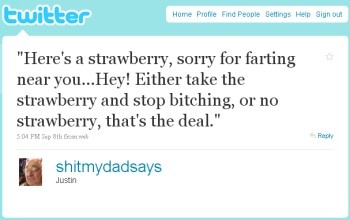 The popular Twitter feed Sh*t My Dad Says is reportedly being developed into a sitcom for CBS.

Sh*t My Dad Says debuted on Twitter in August and has since grown into a genuine sensation, with over 700,000 people following the nuggets of oft-profane wisdom dispensed by Justin Halpern's 73-year-old father. "The baby will talk when he talks, relax," the elder Halpern said in one gem. "It ain't like he knows the cure for cancer and he just ain't spitting it out."

That, apparently, is all CBS needs to make a sitcom. The network has picked up a project based on the feed (which will no doubt be relabeled to Stuff My Dad Says or something similar) being co-written by Halpern and Patrick Schumacker. David Kohan and Max Mutchnick, the creators of Will & Grace, are serving as executive producers and will supervise the writing.

"If I wasn't me, I would kind of hate me," Halpern, who still lives with his dad, told the Wall Street Journal. "A lot of people are busting their ass, and a lot of people are really talented. And I just got lucky."

It's just what the world needs: A sitcom featuring the zany antics of a gruff-but-lovable father figure, his hip, youthful son and their outrageous friends and neighbors, all based on a Twitter feed. Does anyone else think this is a terrible idea? On the other hand, Will & Grace always struck me as just slightly less funny than that time I got shanked in the joint and it somehow managed to notch up 16 Emmy Awards. So maybe it's just me.

Movies and TV: Seinfeld Was Geek TV Before Geek TV Was Cool Fanghawk 18 Comments
Comments on