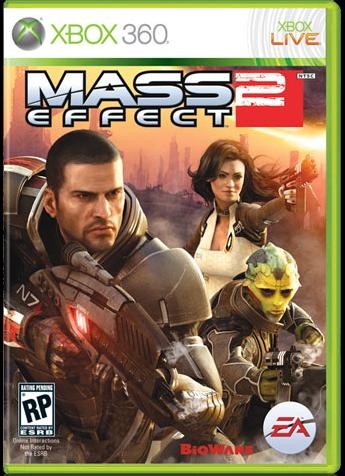 Mass Effect 2 is looking great so far. Its newly-revealed box art, on the other hand, isn't.

While rumors that BioWare agents have kidnapped a member of The Escapist's staff and spirited them away to their well-hidden battle fortress concealed deep within the frozen Canadian wilderness in order to force them (at gunpoint, no less) to play through a bit of Mass Effect 2 have yet to be corroborated, everything we've seen of the title is looking pretty damn ace so far - the game seems to be improving on the first installment in almost every way...

...Except where box art is concerned. The official box art went up on the game's official site today, and while I've certainly seen worse in my gaming career, it's... kinda underwhelming.

It isn't so much that the art itself is bad, as it is that it's incredibly generic. Ooh, a manly-looking brown-haired protagonist with a futuristic-looking machine gun, so edgy! The first game's box art wasn't a Leonardo da Vinci masterpiece, but it at least communicated the idea of "this is an incredibly deep and complex space opera," rather than looking like "this is a sci-fi shooter just like every other sci-fi shooter, only your sidekicks are a guy with a lemon for a face and the girl from House," to borrow a description from our very own Malygris.

Nothing about this art appeals to me in the least. In fact, were I to see this on shelves having not heard of the game before, this art would make me less likely to buy it.

Is it just me? Am I making something out of nothing here, with sensibilities far more delicate than I'd have ever guessed? Or is this box art just that damn uninspired?