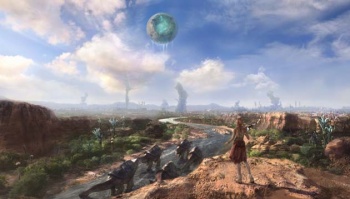 JRPG giant Square-Enix wants to see more of its games achieve simultaneous worldwide releases - even if it means holding back the release in its native Japan.

Square-Enix has historically been very good at doing things like making games where androgynous teenagers clad entirely in belts and zippers kill God, but historically very bad at other things - such as getting its games released on a reasonable schedule outside of Japan. A look at the release dates of the six most recent Final Fantasy titles (not counting FFXI) in Japan and North America says it all:

The shortest delay there was with FF9, which managed to eke out a NA release just four months after its launch in Japan, but the rest of the games took longer - with most of them taking over half a year to see release outside Japan (and gamers in PAL regions generally had to wait even longer).

Once upon a time, it was expected that games would come out in Japan well before they were released in the West, but those days are mostly behind us and for blockbuster titles, simultaneous worldwide releases seem to be the expectation nowadays. Given that these games have massive amounts of text to sift through, one might be inclined to blame the translation and localization progress, but that just doesn't fly in a world where Metal Gear Solid 4 can see a simultaneous release around the globe.

Amidst concerns that the Japanese game industry is foundering, though, Squeenix CEO Yoichi Wada told Ars Technica that the model of delayed Western releases for his company's flagship titles just ain't gonna fly no more, and points to Final Fantasy XIII's March release date in North America and Europe - just a comparatively meager three months after its Japanese release - as evidence of the company's drive to achieve global release parity.

"For the last three years, we have worked very hard to close the gap between Japanese release timing and North American and European release timing," he said. "We tried to go for the global, simultaneous release but that was something that was inconceivable, in a sense. But we have been able to close that release window gap to three months. For us, it was a very big step forward."

In fact, Wada says that in the future, Square-Enix plans to delay its Japanese launches in order to accommodate Western fans of its products with worldwide releases, though Final Fantasy XIII really "couldn't [be delayed] any longer." Don't get me wrong, Wada-san, I appreciate the sentiment, but ... wouldn't it just make sense to focus on simultaneous development, rather than artificially delaying your Japanese releases to make us foreigners happy? This isn't necessarily hurrying up the Western releases, it's just slowing down the Japanese ones - the only real tangible benefit I see here is that Western Final Fantasy fans don't have to worry so much about spoilers.