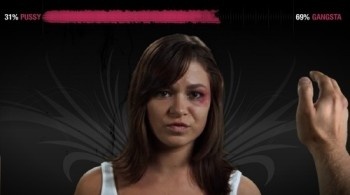 Ever see A Clockwork Orange? In it, Malcolm McDowell is "cured" of his violent, predatory impulses through a program of concentrated aversion therapy that includes exposure to images of extreme violence and depravity. That same principle is apparently behind Hit the Bitch, a game from Danish NGO for Children Exposed to Violence at Home, in which players use their mouse (or their own hands, if they're webcam-equipped) to smack around a woman.

As the beating continues, the player's rating will move from "100 percent pussy" to "100 percent gangsta," at which point the game ends. I wasn't able to try it myself (currently, only users from Denmark can actually play) but screenshots indicate that the woman's face will grow increasingly banged up as the game continues. When it finally comes to a finish, with the woman crumpled tearfully on the floor, the game calls players a "100 percent idiot" and issues a "scolding in Danish."

Despite its negative portrayal of domestic violence, Jezebel.com criticized the game for its "inescapable sexualization" of abuse. "This game is saturated with the sexy-violence meme, from the woman's cute clubbing outfit (complete with a short leather skirt) to the post-hit pouty face she makes (before her face is completely bruised that is)," the site said. "The project is way too glamorized and stylized to have the impact the organization hoped. Instead, the project ends up reinforcing the idea that violence is sexy, while allowing their ultimate message to fall to the wayside."

Furthermore, according to AdFreak, it also falls short by imposing relatively light consequences, even in a gaming sense, for pummeling a woman senseless. "Getting called a '100% idiot' at the end doesn't feel like much of a rebuke," it said. "Perhaps you're supposed to feel guilty, like a real-life abuser might, for continuing to hit the woman just to see what happens next?"

No matter how sternly it ends, I just can't see this as a good idea. Some people will find Hit the Bitch disturbing while others, sadly, will be momentarily amused by it, but as an educational tool it's value is very near zero. Games can be fantastic teaching tools but they're all about positive reinforcement, something entirely inappropriate for a subject like domestic violence.