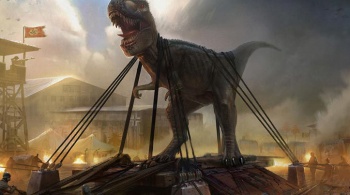 To hell with zombies - World War II would have been so much more awesome if Hitler had brought back the freakin' dinosaurs.

The overdone World War II FPS has become such a running joke in the industry and gaming press that it's actually kind of bold for a company - especially a smaller company - to actually make a new one. How can you possibly make goose-stepping, Sieg-Heiling Nazis interesting again?

Answer: You give them Tyrannosaurus Rexes.

Dino D-Day is a FPS slated for release in 2010, where the player is in the shoes of famous-paleontologist-turned-soldier Sgt. Jack Hardgrave fighting in the Northern African campaign of the Second World War. Of course, in real life, the Allies in the African theater just had to contend with the military mind of Erwin Rommel. In Dino D-Day, the Nazis have resurrected the dinosaurs.

While the game will see a commercial release of its own, the developers have apparently released a teaser Half-Life 2 mod. I haven't downloaded it yet, and I don't know if it's any good, but I do know that this is the best idea ever. Seriously, why has it taken game designers so long to come up with "Hey, what if Hitler had a pet Deinonychus?"

World of Warships Preview - I Sank Your Battleship Fanghawk 3 Comments