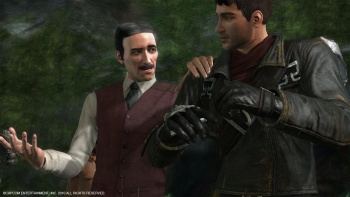 Variety has reported that Brad Pitt's production company signed a contract with Capcom to develop a movie based on Dark Void.

Pitt has signed on to play Dark Void's main character, 1950s cargo pilot William Agustus Grey, who crash lands in the Bermuda Triangle and wakes up in a parallel universe. Though the timing feels somewhat early - the retro-sci-fi shooter isn't even due out in North America until January 19th - Dark Void might be compelling enough for a film franchise. Grey and other survivors, including Nicola Tesla, contend against the Watchers, an alien race poised to take over our world. Oh, and there are jetpacks.

The early announcement might be a coup for films based on videogames as such movies don't usually garner such A-list talent like Pitt. The fact that his company, Plan B, is producing the film as well may prove interesting. Plan B's track record is pretty good with films such as Troy, Charlie and the Chocolate Factory, and The Departed under their belts.

Is it just me or is anyone else worried this movie going to suck as bad as The Rocketeer?