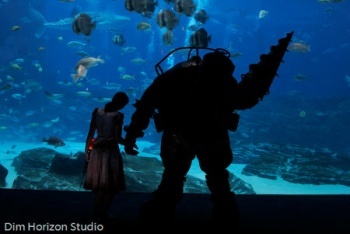 The guy who built the coolest Big Daddy costume ever has taken it on the road to create some of the most stunning game-related photographs I (and you) have ever seen.

Remember the guy who built the incredibly awesome Big Daddy costume and then showed it off at Dragon*Con? (You should, we've been asking if you remember him since he followed up his Portal gun with an ADAM syringe in February.) He's back! This time around, though, he hasn't built anything new, he's just taken his Big Daddy costume, along with his Little Sister-ized fiancee, to the Georgia Aquarium to take some absolutely amazing cosplay photos.

I'll admit that I'm not a big cosplay kind of guy, but you can't help but be impressed by these shots. Costume creator Harrison Krix's work is undeniably brilliant but seeing it in an environment like this, rather than the drab environs of an Atlanta convention center, makes all the difference. Have a look at the full set at Geekologie.