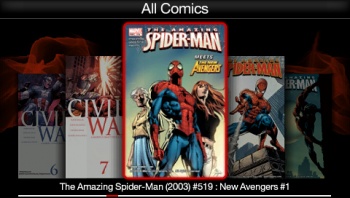 Sony has released its free digital comics reader, and is throwing in a free comic for a limited time to tide us over until the actual digital comics store launches.

I know what you're thinking: "Why download the reader if I can't use it yet?" Actually, you can. Sony is giving up two free digital comics, though it looks like only to English speaking regions for now. Currently available for download are an issue of Star Trek: Year Four - The Enterprise Experiment and Transformers: All Hail Megatron #1.

The code required to download Star Trek can be found on the PlayStation Blog, while the code for Transformers is found at the PlayStation Digital Comics website. The codes are supposedly region specific, so make sure you're entering the correct one, and they are only valid until December 16, 2009.

Sadly, these can only be redeemed using a PSP, not using Media Go on a PC or through a PS3, so if you're like me and your PSP won't connect to your wireless router, then no free comic for you. Some have complained of download trouble, but some help is available here, and it wouldn't hurt to also follow PlayStation Digital Comics on Twitter.

Downloading comics straight onto a PSP is a novel idea, though it almost pains me to see another obstacle put in the way of the world's remaining comic shop owners. I don't see myself buying many comics digitally unless they're super cheap or have special features included. According to the PlayStation Digital Comics Twitter account, publishers are able to add sound to their releases, and even manga should be available on the service. For manga, a digital reader almost sounds perfect if the pricing is right, because of the space requirements needed for the massive amount of physical volumes out there for many titles such as DragonBall. For The Walking Dead and other more "traditional" comics, I think I'd prefer the real thing.