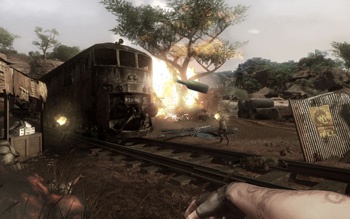 A Ubisoft employee has confirmed that Far Cry 3 is in the works, saying that the game looks "pretty exciting" so far.

Far Cry 2 wasn't exactly a runaway smash hit, but sales were apparently solid enough to warrant a third addition to the franchise. While Ubisoft hasn't issued any official word on the game at this point, Ubisoft writer Kevin Shortt confirmed with Official PlayStation Magazine that a second sequel is in the works.

"No I'm not," he said when asked if he was working on Far Cry 3. "But I know the team are and what I've seen looks pretty exciting."

Nothing else was said about the game, so whether we'll embark upon another trek through the jungles of Africa or head off elsewhere is unknown, but CVG noted that Far Cry 2 story designer Patrick Redding said last year that the followup would "likely" remain in Africa, although a jaunt to Antarctica was also possible. Antarctica? Hey, as long as I get to wear a Hawaiian shirt to the party, I don't much care where it is.