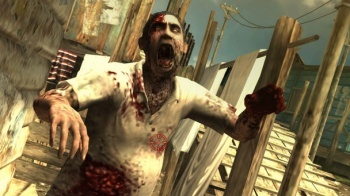 Capcom has responded to accusations by members of the clergy that Resident Evil: The Darkside Chronicles promotes the occult, calling it "scaremongering and typical religious hysteria."

Released in North America last week, Resident Evil: The Darkside Chronicles is a Wii title built around the events of Resident Evil 2 and Resident Evil Code: Veronica along with additional, original content. While it's nothing particularly new for the most part, three U.K. religious leaders, Bishop Mark Bryant of Jarrow, Archdeacon Brian Smith and the Rt. Rev. John Goddard, nonetheless felt compelled to criticize the game for encouraging interest in the occult among children.

"If we dabble in this area we open ourselves to influences and put ourselves at risk," Goddard said. "I would regard any encouragement for children to be drawn into this behavior with extreme horror."

But in a rather strongly-worded response, Capcom dismissed the concerns outright. "This is scaremongering and typical religious hysteria. You cannot blame society's ills on video games. It's just absurd," said Capcom representative Leo Tan. "Most games (and movies) like Resident Evil show characters fighting evil, not supporting it. Unfortunately the clergy is showing a lack of understanding of the videogames industry and is too quick to splash the holy water and lump videogames players into stereotypical boxes.  "

"Videogames are entertainment and like horror movies or other scary films they are covered by a ratings system," he continued. "Resident Evil, for example, is a 15 and not suitable for anyone under that age. Parents have to be trusted to adhere to these age restrictions and use common sense."