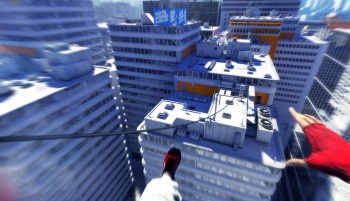 A lighting artist at EA's DICE studio may have inadvertently announced Mirror's Edge 2 by listing it on his online portfolio.

Earlier today, Joystiq noticed that Oscar Carlén, a lighting artist at Swedish development studio EA DICE, had some interesting listings on his portfolio: Under "2009-Present" Carlén claimed to have worked on two games in particular, Battlefield 3 and Mirror's Edge 2. Said listing has been removed, but the word is out.

To be fair to Carlén, we'd already heard about a new Mirror's Edge project back in June, but this is the first time the title has been pegged down as Mirror's Edge 2, no matter how briefly. Still, this may come as good news to people who feared that Mirror Edge's lackluster sales meant the end of the franchise, especially after EA laid off 1,500 employees last month.

So it looks like despite the job cuts, the Mirror's Edge team largely escaped getting the axe. Well, they might be looking for a new lighting designer now, but hopefully it won't come to that. Accidents do happen, after all.