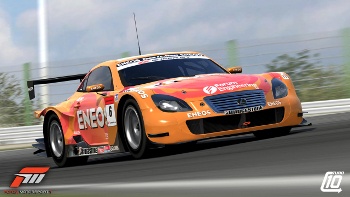 Electronica artist Lance "DJ Drunken Master" Hayes, whose work has been featured in The Escapist Show and Escape Radio, composed the soundtrack to hit racing sim Forza 3 - and that soundtrack goes on sale today.

If you've been merrily racing your way through Turn 10's Forza Motorsports 3 and suddenly thought to yourself that the pulse-pounding electronica that provides the backdrop to your high-speed action sounded kind of familiar, well, you may have heard the composer's music before - here on The Escapist, no less!

The Forza 3 soundtrack is the work of electronica composer Lance Hayes, aka DJ Drunken Master, and it goes on sale today via Sumthing Else Music Works - or, if you're the digital distribution kind of guy, it's available via Sumthing Digital, too. The talented Hayes' work has previously been featured here on The Escapist in episodes of The Escapist Show and Escape Radio, such as our look at The Conduit and feature on CryTek.

"It's been a long road to get to where I am now in my career," Hayes told The Escapist. "When you get tapped to work on a project like Forza 3 it really makes all of that work worth the effort. There are few things as fulfilling or empowering as receiving validation from an industry you've loved and followed since you were a kid."

"Another thing that makes being a composer worth the effort is the fans. I've been fortunate enough to have lots of people that hear my work in projects like The Escapist Show and then take the time to get in touch to let me know they liked what they hear. That means a lot to me."

And from now on, we'll have bragging rights to tell everybody that we knew him before he got big.