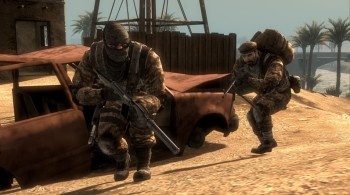 Common Sense Media has published its list of "Ten Cool Games That Are Uncool For Kids," a surprisingly sensible list of games that probably shouldn't be played by kids along with alternatives that will help keep their complain-holes shut over the holidays.

It's a common problem for parents with young teenage kids: They won't stop yapping about the latest murderrific videogames that all the cool kids are playing but you, as someone who actually takes an interest in child-rearing, aren't quite as enthusiastic. Short of hitting them until they stop making noise, what's a beleaguered parent to do?

Fortunately for all involved, Common Sense Media is here to help. Its list of ten hot games your kids might be bugging you for (and probably shouldn't play) and ten alternatives more suited to younger gamers is surprisingly comprehensive and has obviously been put together by someone in the know. If you're expecting yet another overwrought effort to keep the kiddies from playing anything harsher than Freecell, you're in for a surprise. The list in full, with alternate suggestions in parentheses:

Interestingly, the list doesn't go out of its way to criticize the "uncool" games; most, in fact, are praised for what they offer to mature gamers. The alternatives are hardly a collection of warm-and-fuzzy Care Bear games suitable for players of all ages, either. The group said it stuck with "T-rated titles geared for ages 12-15 [with] matched gaming systems - so if you nix an M-rated PS3 game, you can replace it with a similar T-rated PS3 game."

"Similar" is in the eye of the beholder and a kid who's spent a month begging for Dragon Age isn't going to be too thrilled to get Braid in its place. Many of the substitute games, meanwhile, despite being toned down in comparison to the others still include content that some parents will find objectionable. Overall, though, for parents who want to keep the kids happy while avoiding the worst excesses of the M-rating, this list isn't a bad place to start.