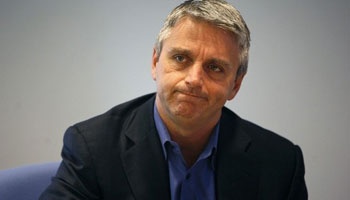 Electronic Arts CEO John Riccitiello doesn't like piracy but says that as long as it's a fact of life, he'd rather treat it as a "marketplace" than take the heavy-handed and ultimately failed approach of the music industry.

The videogame industry has little to show for its years of struggle against piracy beyond a legacy of abject failure. DRM succeeded only in angering legitimate customers, while file-sharing sites have proven remarkably resilient in the face of the legal system. So as the old saying goes, if you can beat 'em, sell 'em some DLC.

"They can steal the disc, but they can't steal the DLC," Riccitiello said in an interview with Kotaku. Some of the people who buy DLC haven't necessarily purchased a legitimate copy of the original game, but Riccitiello figures it's better for EA to make a few bucks off them where it can rather than engaging in a losing, zero-sum battle. "There's a sizable pirate market and a sizable second sale market and we want to try to generate revenue in that marketplace," he said.

Riccitiello said the music industry made a mistake by "demonizing" its customers and hopes that the value offered by DLC along with other services like the EA Sports community hub or the BioWare social network will convert at least some pirates into legitimate customers. "The consumer seems to really like this idea that there is extra stuff," he said. "The consumer wants more, and when you give them more or sell them more it seems to be extremely well received."

"I don't think anybody should pirate anything," he added. "I believe in the artistry of the people who build [the games industry.] I profoundly believe that. And when you steal from us, you steal from them. Having said that, there's a lot of people who do."

It's hard to ignore the irony of this statement coming from the top dog at Electronic Arts, a company that only a year ago was almost universally reviled for the intrusive (and ineffective) DRM it forced on gamers through games like Spore and The Sims 3. But the company has made an almost complete turnabout since then: In June, Riccitiello said he viewed pirated copies of The Sims 3 as very much like a "demo" and two of its biggest releases, Dragon Age: Origins and the upcoming Mass Effect 2, have both eschewed SecuROM and online authentication for a simple, old-fashioned disc check. And with Dragon Age DLC generating over $1 million within the first week of the game's release, it looks very much like Riccitiello may be on to something.