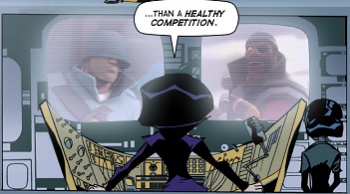 If this five-page comic published by Valve is any indication, the next Team Fortress 2 classes to see overhauls will be the Soldier and the Demoman - and the update will happen very, very soon.

It's been the better part of a year since the last Team Fortress 2 class update - the Sniper and Spy faced off back in May - and naturally, fans of the game have been getting antsy for more, with some even teasing their own fake class updates. So the appearance of a five-page comic on the official TF2 web site called "The Administrator" has members of the game's community all a-bustle.

In "The Administrator," we see the game's announcer - finally revealed to be playing both sides of the war - overseeing the RED and BLU teams as they fight their endless battle. Her aide interrupts her, however, with troublesome news: Having met at a projectile weapons expo, the RED Demoman and BLU Soldier have become fast friends. Worried that the two will discuss work and find out that they're both fighting for the same people, the Administrator calls in an emergency order to spark some "healthy competition" between the two to destroy their friendship once and for all.

It's pretty hard to interpret this as anything but an impending update for the Soldier and Demoman classes, and given that yesterday's reveal contained a link to the comic with the phrase "Friendship ends in one day," it's likely that we'll start seeing the first goodies from the update ... sometime today, actually.

Interestingly enough, fans discovered new sound files in what appeared to be an otherwise normal update to the game on Monday that have the Administrator berating both sides of the war, suggesting that there may in fact be a new game mode coming in which RED and BLU work together to take down their mastermind overlords ... which would be strange, to say the least.

Personally, I'm a happy TF2-er, because the Soldier and Demoman are both my classes of choice. People who play the Engineer have cause to worry, though - not only is the Engineer the one remaining class without updates of his own, but an overflow of Soldiers and Demomen means that the guy's poor Sentries aren't going to have very long lifespans once the update hits.