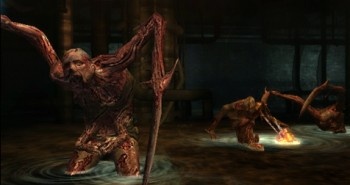 An early look at Dead Space 2 has revealed a much-changed game, with different environments, new monsters and a reluctant hero who's not quite right in the head.

The January issue of Game Informer is running an in-depth and - fair warning here - slightly spoiler-ish look at the upcoming EA release Dead Space 2. The new game will take place three years after the events detailed in Dead Space; engineer hero Isaac Clarke managed to escape the doomed ship Ishimura but has apparently been left a little unhinged by the ordeal. But as the only survivor of the first Necromorph incident, people look to him for salvation when the grotesque monstrosities begin to surface on the massive, heavily populated space station known as the Sprawl.

The game will be less of a straight-up survival horror release than the first Dead Space. The developers said they want the sequel to be scarier than the original but with better pacing, giving players the chance to be the hunter as well as the hunted. More "epic moments" are also in the works, presumably along the lines of the "Shoggoth in a tumble dryer" bit, and monster behavior will be smarter and less predictable. Zero-g sections are also being reworked to allow players to control their direction and use weapons during jumps.

Isaac Clarke himself will also figure more prominently in the game. He will actually speak and have a distinct personality, and while his experience fighting Necromorphs will be seen as an asset by other characters, his delicate mental state will be pushed to the limit, and possibly past it, by the pressures of the new outbreak.

Clarke's famous engineer's suit will have a new look and a wide range of customizable options and upgrades, weapons have been upgraded to give players a reason to use something besides the plasma cutter for the entire game and the control scheme has been refined to make it more suitable for combat. Despite Isaac's new aggressiveness, however, the developers said they're not trying to turn him into some kind of new Master Chief and that the game will still very much be in the horror genre. And while no details were released, a multiplayer component will be included that will let players "strategically dismember" their friends.

I'm still a bit iffy on the idea of messing too much with the Dead Space formula but I have to admit that this sounds like pretty hot stuff. For more information, check out the latest issue of Game Informer or head over to Rely on Horror, where they've already done it for you. Dead Space 2 is currently scheduled for release in 2010 on the PC, Xbox 360 and PlayStation 3.