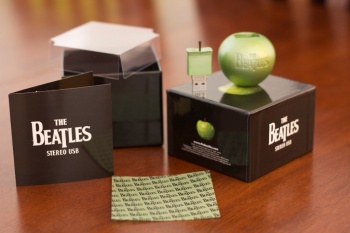 The Beatles USB, containing all of the recently remastered albums, is the coolest thing to be made into the shape of an apple.

The USB drive contains all 14 of the band's studio albums, including both FLAC format and a 320 kbps mp3s. It is the same material that was released on the CDs this fall, but in a much more convenient delivery system. The FLAC 44.1 Khz 24 bit files are actually better than CD quality. Only 30,000 of the limited edition drives were made and they are currently sold out, which is no small feat at $279 a pop. The drive rests in a small cast iron apple about 2.5" in diameter. Pulling on the stem of the apple release the USB drive, and setting it into its slot provides an oddly satisfying click as magnets latch on to hold the drive in place. The apple stands for Apple Records, which was established by the Fab Four in 1968.

While The Beatles music isn't yet available for download on iTunes or Amazon, it is a good sign that they are embracing digital distribution like this USB drive and The Beatles: Rock Band. Perhaps more is to come.

The Escapist's own Greg Lincoln received his Beatles USB drive over the weekend and was impressed with the overall package. "When I bought it, I thought it would come in a cheap plastic thing," he said. "But opening it up, I was impressed with the cast metal design. It will look great in a curio cabinet or something."

Check out the photos of his unboxing in the pictures below.

Gallery of the Day: 8 Album Covers Considered To Be Quite Legendary DrStrangelove 35 Comments

Escapist Podcast - Science and Tech: 023: The USBpocalypse is upon Us! Also, Windows 10 The Escapist Staff 9 Comments
Comments on