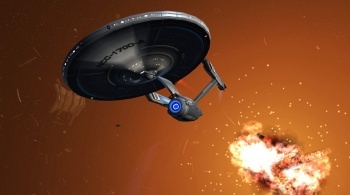 Zachary Quinto, who played Spock in J.J. Abrams' reboot, will be providing the voiceover for the tutorials in Star Trek Online.

Cryptic Studios and Atari have announced that Zachary Quinto will be playing an Emergency Medical Hologram, not unlike the character from Star Trek Voyager. The EMH will guide players through the early parts of Star Trek Online and introduce them to the user interface, as well as how to level up and go on "away missions." Star Trek Online is scheduled to release for the PC on February 2, 2010 in North America and the 5th in Europe and Australia.

Quinto seems up to the task. "Being a part of the Star Trek universe has been an incredible experience for me," he said. "Extending that experience into the gaming space - and sharing it with gamers and trek enthusiasts around the world - makes it even more exciting."

It is odd that the actor playing Spock in the movie isn't actually playing Spock in the game. But as STO is set 20 years after the events of the film Star Trek: Nemesis, which would place the game approximately 160 years after what happened in this summer's Star Trek movie. With alternate timelines and 2 different Spocks, perhaps it's better for Quinto to just be an EMH so that my brain doesn't explode.

Plus, despite the fact that he's banging Uhura, Quinto will never be as cool a Spock as Leonard Nimoy.

A View From the Road: The Stool and the Chair John Funk 40 Comments