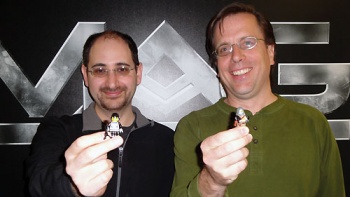 The developers of MAG claim that the MMO shooter on PS3 could support more than the 256 player battles they currently have planned.

Mike Nicolino, the Software Manager at Zipper Interactive, and Nate Klee, the Chief Software Architect discussed the framework behind MAG on the Mag Blog. The shooter is an MMOFPS set in 2025, when national armies are banned which leads to the rise of private military companies. The technological capabilities of the PS3 allow up to 256 players to engage in battles in MAG but the infrastructure exists to allow even more players. MAG, previously known as Massive Action Game, is scheduled to be released on January 26, 2010 in North America on the PS3.

From the beginning, the scale of MAG was important. "I had to worry about the scale of the thing," said Nicolino. "I had to say 'Remember: there's going to be 256 people in this game at the same time. So, we're going to have to make sure that we can implement your idea correctly with that much going on, otherwise, we may have to make some adjustments.'"

Nicolino offered a software developer's perspective on what it is like working on the PS3. "The PS3 is a lot more flexible. It has a bunch of memory, it has a hard drive, and it's a little more PC-like from a development standpoint, so I like that," Nicolino said.

Klee added that there were some challenges to developing for that platform which ultimately paid off: "Building a new engine on new hardware is time consuming for sure, but the PS3 itself is very, very powerful and it takes a custom effort that asks you to think about things in all-new ways to best utilize it." He went on, "That's why MAG only runs on the PS3 by the way - because the system's SPUs are so powerful that they give us the technical capability to simultaneously run 256 players in the way we do."

The players are divided into into 8 man squads, with 4 squads forming a platoon and 4 platoons forming a company, which is why they settled on 256 players. But Klee said that the way MAG utilizes that hardware and networking capability would allow for even more concurrent players:

We built a technology that can support a huge number of players - we picked 256 because of gameplay balance, how we divide squads up, etc. But with our infrastructure, we can increase the number of players to beyond even 256 if we wanted to. There are trade-offs that would have to be made, of course, but the technology supports even more players if the need was there.

If only bigger meant better, then MAG would be the best console shooter ever made by humans. I reserve the right to pass judgement when it is released. You, on the other hand, can feel free to judge away.

Source: the Mag Blog via TheSixthAxis