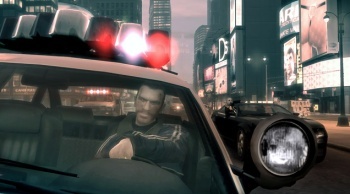 A stressed-out Boston mother recently decided that the best way to handle her young son's non-stop videogaming was to call 911 on him.

When Angela Mejia woke up at 2:30 in the morning last Saturday and realized her 14-year-old son was playing videogames in his bedroom despite being told to go to sleep, she marched into his room and unplugged his console. Then, as the inevitable argument ensued, she took matters to the next level: She called 911.

"I have support from my church, but I'm alone," she told the Boston Herald. "I want to help my son, but I can't find a way."

He had apparently been playing Grand Theft Auto, an "exceedingly violent" game that Mejia said she strongly disapproved of. "I would never buy that kind of video. No way," she said. "I called [the police] because if you don't respect your mother, what are you going to do in your life?"

Police responded to the scene and were apparently able to talk her son into turning off his PlayStation and going to sleep". "They were just like, 'Chill out. Go to bed'," the boy said.

"Clearly, it's a very, very rare situation for someone to call the cops," said Grand Theft Childhood author Lawrence Kutner. "That she went to the extreme of calling the police tells me more about her level of frustration than anything else."

Who's Your Daddy? Erin Hoffman 2 Comments