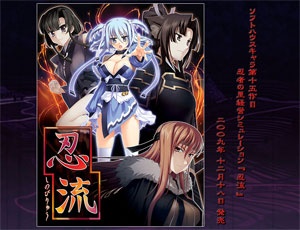 It was only a matter of time before characters in Japanese eroge started making fun of the firestorm over RapeLay in the games themselves.

It feels like I've recapped the furor surrounding Illusion Games' RapeLay so many times by now that you could gag a moose with my massive recap skills, but here goes again, in double-time: An Amazon.com listing for RapeLay caused outrage back in February, leading to a boycott called by a New York Councilor (despite it not being actually released over here). Rape games were banned in Japan, then they weren't, then they were again, then some eroge makers stopped letting Western viewers view their web sites, while others got around the regulations by just not calling them "rape games" anymore. Phew, you still with me? Good!

Given the fallout and the controversy, it was only a matter of time before the game makers started poking fun at the whole kerfuffle in their games. The following text appears at the beginning of Shinobiryuu, an eroge released in Japan last Friday (as translated by Canned Dog):

This is a declaration made with the consensus of all the characters that appear in this story.

All the characters appearing in this game have gone through special training and all actions carried out are done on the basis of mutual agreement.

Even if you're a inhuman person who believes that fictional characters in creative works do not have human rights, please do not ignore this.

We also thank all the kind people who see a character in the story saying phrases such as "help me" and take it as a real call for help.

However, even though you are worrying for the characters in the story, these are all lines spoken from a script.

They are not saying all this from the bottom of their hearts. We are sorry that they have put in so much effort into their acting that some people will confuse it as something that is really happening.

This game is a fictional story.

If that little tongue-in-cheek disclaimer wasn't enough, the game also lampooned the hubbub in a conversation between two characters:

Surprised Suigen Ninja:
I've recently learnt something that surprised me

Listening Suigen Ninja:
What is it?

Surprised Suigen Ninja:
There are apparently some special people that will get angry and show sympathy for us if we get raped. And they'll start lobbying for us too.

Listening Suigen Ninja:
Wow, we even can't do anything ourselves without a creator or a player but we have human rights

Surprised Suigen Ninja:
We can't be greedy. But well, since we have human rights we might as well suggest it.

Do you hear that? That's the sound of a buxom ninja girl in very tight fabric saying that people should "stop taking unnecessary actions," and obviously in no way reflects the feelings of the people making the game. Nope, not at all.

RapeLay is still the gift that keeps on giving to game journalists, almost a year later. God bless its perverted little soul.