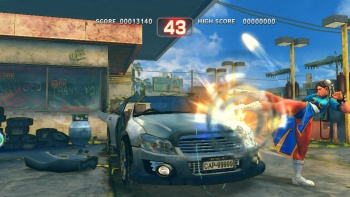 It was bound to happen: Capcom has announced delays on three major titles - Lost Planet 2, Super Street Fighter IV, and Monster Hunter Tri because the first half of 2010 is too damn crowded.

If you think back just a few months, you may remember a slew of games that were scheduled to hit shelves this fall - but were pushed back as publishers realized that they would be competing with the juggernaut that was Modern Warfare 2. Instead of trying to vie for consumer awareness with one of the biggest titles of all time (thanks, Kanye), many opted to simply get some extra time to finish their games, pushing a bunch of big-name titles back to early 2010. Surely, the publishers reasoned, they'd benefit from avoiding the packed holiday season and get the new year all to themselves!

Well, maybe - if all of their competitors hadn't decided to do the exact same thing. While not quite as bad as a normal holiday shopping season (and without the looming threat of MewTwo), Q1 2010 is looking pretty damn packed, and it seems like someone at Capcom noticed this.

Rather than compete with games like 2K's BioShock 2, Sega's Bayonetta and BioWare's Mass Effect 2 - and even its own Dark Void - Capcom has thrown up its hands in frustration, muttered "Bother this nonsense," and delayed three of its high-profile titles until fiscal 2010 (April 1st, 2010 - March 31st, 2011). The three games in question are Lost Planet 2, Monster Hunter Tri (but let's face it, despite Capcom's best efforts I can't see that game doing that well in the States) and Super Street Fighter IV.

Guess we'll have to wait a bit longer to once more beat the hell out of cars. But don't worry, because there's still a crapton of stuff coming out in Q1 2010. Unless it all gets delayed, too.