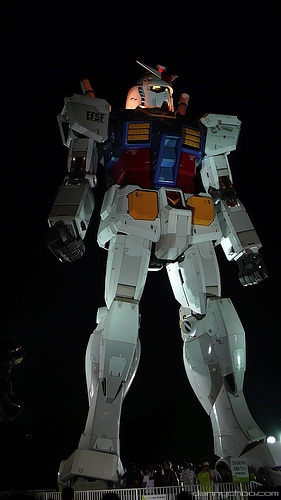 Did you miss the giant 1:1 scale Gundam statue in Odaiba, Japan? You'll have a second chance soon enough, as the life-sized Mobile Suit will be making an encore appearance next summer.

When work finished last June on the 59-foot, full-scale statue of the iconic RX-78-2 Gundam from the groundbreaking mecha anime Mobile Suit Gundam, viewers here in the West naturally had more than a few questions. But beyond questions like, "How much did this thing cost," and "Why the hell would you build something like this," (the answers to which are "quite a bit" and "because it's awesome," respectively), the weirdest thing about the statue was that it was only a temporary thing. They were building something that was incredibly expensive and incredibly badass, and they were going to take it down after only a few short months.

Despite a warning from the gods that something that freakin' sweet should be left standing proud for all to see, the giant Gundam was indeed taken down in September after three months and at least four million visitors. But fret not, everybody! If you missed your chance to make the pilgrimage to Mecha, you've got another shot at it - Bandai Namco will be rebuilding the statue next year according to Japanese news site Sanspo.

This time, though, the Gundam won't be standing guard over Odaiba, but rather the city of Shizuoka. To be precise, it will be standing at the eastern exit of the Japan Rail Higashi-Shizuoka Station, which serves about 60,400 commuters every day (at least, if Wikipedia is to be believed). While this might seem random, Shizuoka actually has a connection with the Gundam franchise, as it is home to the factory that produces all of Bandai's model kits. So those tiny plastic Gundams (14 of which are sitting on my desk right now) will be getting a very, very big brother soon enough.

It's unclear if this will be a permanent home for the statue or merely a temporary one like its appearance in Odaiba - personally, I'm keeping my fingers crossed for the former. Something this cool should be made to stand tall through the ages, so that in the distant future after humanity has all but wiped itself out in nuclear war and our distant descendants (after rebuilding) unearth the remains in an archeological dig they can label it as one of the gods that their ancestors must have worshiped. One thing is clear, though: I believe I speak for everyone here when I say, hell the f*ck yes!

Mobile Suit Gundam was a 1979 anime set in a future where humanity had established space colonies, several of which rebelled and fought to destroy those still living on Earth. Directed by Yoshiyuki Tomino, the series would establish the "real robot" genre, which treated giant robots as military hardware rather than the magical superheroes of the "super robot" genre like Voltron. The Gundam metaseries is one of Japan's longest-running and most prolific animated franchises, and is a perfect example of why Japanese mecha are infinitely more badass than the walking crates-on-legs that make up the majority of "Western" mecha.