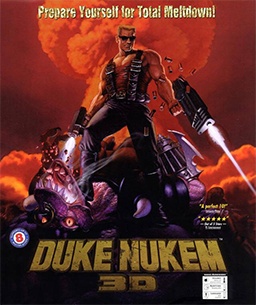 Duke Nukem's reputation has been decimated by poor handling, which looks to continue in the future unless some of the character's upcoming releases actually turn out to be good.

It seems that Duke Nukem really could be on the comeback trail after all. According to ShackNews, the latest issue of GameSauce offers a few interesting statements from 3D Realms CEO Scott Miller on the Duke Nukem franchise, in addition to some figures on how the company has been able to stay in business over the years.

Miller alleges: "The next few years should see a strong resurgence in Duke." He points to many projects in development, some of which are due in 2010 though most still unannounced. One of these projects could be the Duke Nukem Trilogy, which is a set of three associated games for the PSP and DS that will be released separately and take place during different eras. Another may have something to do with the mysterious screenshot released on Duke Nukem's Facebook page in late November, and there are rumors swirling around various other possibilities as well.

Miller also offered a bit of proof as to just how much money can be made with this model, showing how 3D Realms has been able to stay afloat. 3D Realms worked with Remedy Entertainment on Max Payne, which Miller describes as his "biggest killing," revealing: "We made $30 million in royalties on that game (off of a $2.5 million investment), plus another $48 million selling the IP to our publisher." 3D Realms has also made big profits in the past, with a "25 times" return on its $300,000 investment in Duke Nukem 3D, and another "killing" made on Wolfenstein 3D. Along with lucky investments and profits from the sale of the Gathering of Developers to Take-Two, 3D Realms has earned a nice chunk of dough over the years. I'm just wondering how much it has also wasted on Duke Nukem Forever.

So there you have it, Duke Nukem Forever is far from dead, as is the franchise as a whole. The saddest part of the way the series has been handled is that the original Duke Nukem 3D was actually a really good game. It had cool weapons, fun level design, and a mature atmosphere. If I was 3D Realms I would have just slapped the original game into some sharp HD graphics and called it a day.