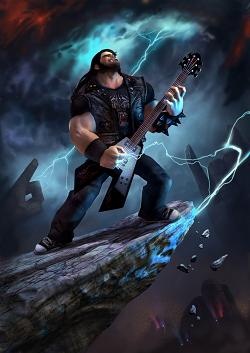 A postmortem from the game's executive producer reveals that annoying legal wranglings drew the attention of the game's designers during crunch time.

The executive producer at Double Fine Studios, Caroline Esmurdoc, wrote a rather lengthy postmortem piece on the development of genre-bending Brutal Legend last month for Game Developer magazine. In it she describes how the development team was blind-sided by then publisher, Activision, when that company announced its slate of games and Brutal Legend was left off the list. Then, after it signed with Electronic Arts, Double Fine was embroiled in a legal battle as Activision tried to block the game from being released. Esmurdoc claimed that all of this drama took time and energy away from lead designer Tim Schafer and the game suffered in quality because of it.

At first, development of Brutal Legend went well because of the relationship with Vivendi. "We had been working collaboratively and successfully with various groups at Vivendi for two years until Vivendi merged with Activision," Esmurdoc said. "We lost touch with both publishers while a lawsuit percolated. The merger announcement and subsequent diminution in publisher contact with Vivendi personnel, especially after such a previously harmonious relationship, caused internal unrest and morale dips among the team. Company meetings often included frustrating discussions about what little we knew about the current situation at our publisher."

Then Activision failed to inform Double Fine that it was not going to publish their game until the rest of the world knew. "We learned Activision was not going to be publishing Brutal Legend through an official press announcement issued by Activision that listed the games they would be shipping, ours conspicuously absent," she said.

Then further lawsuits were brought by Activision after the developer signed with its new publisher, Electronic Arts:

Most of the team was shielded from the drama that unfolded between December 2008 when Electronic Arts announced that they had picked up the game for publication and July 2009 when the lawsuit settled. But Double Fine's leadership was not.

The lawsuit was filed just as the game went Alpha, with a stipulation that it be heard prior to Gold Master being submitted - relegating Tim and myself and a cadre of team leaders to the unenviable job of information gathering, declaration writing, lawsuit reading, witness interviewing and all around non-game-making during the crunchiest, most critical time of development. The lawsuit took its toll on the team, on the company, on our product and on our optimism. Wrong, any way you slice it.

Kudos goes to Shafer, Esmurdoc and the rest of the team at Double Fine for pulling together such a complex game while having to deal with such annoying lawsuits. One wonders how awesome a game Brutal Legend could have been if the designers had had a supportive, helpful publisher throughout its entire development.