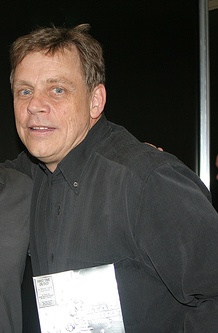 After Mark Hamill played Luke Skywalker in the original Star Wars, many thought his career was in the sh*tter, until he re-birthed himself as an excellent voiceactor in games like Arkham Asylum.

Hamill discussed his career as a voiceover actor in an interview with CVG. Mark Hamill reprised the role of Joker in Batman: Arkham Asylum this summer, after he was the voice of the insane criminal in Batman: The Animated Series from 1992 to 2004. He never thought he'd get to play him again, until he was approached by Rocksteady. The fact that Kevin Conroy, also from the animated series, was on board as Batman and the game was to be penned by Lost and longtime Batman writer Paul Dini made Hamill's return to the role an easy decision. And as we saw at this year's VGA awards, Hamill is set to voice the Joker in the sequel to Arkham Asylum.

Hamill is ok with the direction his career has taken since his huge debut in Star Wars. "I'm sure there's a range of opinions, from 'You're slumming it', or 'Can't you get more legitimate work?' But that snobbishness comes with the business," he said.

George Lucas has made a whole bunch of stuff in the decades since Hamill knew him. Has the actor purposefully resisted going back to his famous role? "I don't really know how to answer that, because I've never been asked to do it. That's fine, though. If you're playing Luke the way he was in the films - from his late teens to mid-'20s - I've outgrown the role. In the story, Luke is so boy-next-door farm boy, it's like Dorothy in Oz. All the other characters that surround him are fantastic. I'm not sure when George's animated series Clone Wars is set, but I think it's before Luke was born. Maybe when he was an infant."

Hamill was one of the first established actors to embrace roles in videogames, from the Wing Commander series to Adrian Ripburger in Full Throttle. But it was his turn as Joker that has given him the most acclaim. Why did he come back to the role after so long a break?

I played Joker from 1992 to 2004 in all the animated versions, including the feature films. I stopped in 2004 and didn't expect to return to him, so when they asked me to come back I was curious. I thought this will be one last chance to play Joker. And it was so much fun to play a character who is clearly insane.

Where does he draw inspiration for the Joker's insane laugh? "I have this absolute abandon when it came to Joker's laugh," he said. "It's like a musical instrument. He laughs at really inappropriate times and finds things funny that sane people do not. I wanted to make that a large part of my arsenal in terms of approaching the character. There are so many people that I pay homage to: a little Dwight Schultz [the A-Team's Murdock] here, Dracula's Renfield there."

He went on to discuss why the Joker's character was so popular in every iteration of the Batman story. "Joker is endearing because he's so committed to what he considers his own genius. There's a real symbiotic relationship with Batman. I don't know if there are two fictional characters more perfectly suited to one another. Maybe Sherlock Holmes and Professor Moriarty. He takes such glee in what he does. It's absurd on its face - you can't bring too much real-life logic to it, but within the comic book world, he towers above so many other run-of-the mill villains."

Miracle of Sound: The Mind of the Bat (Batman Arkham Asylum) MiracleOfSound 142 Comments
Comments on