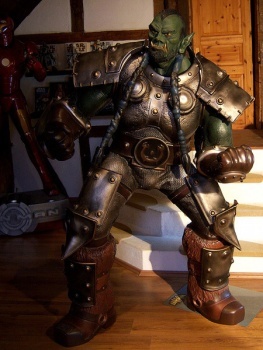 A Scottish man was forced to make a tough choice when his wife laid down the ultimatum: Get rid of the orc or I'm moving to Canada.

42-year-old Robert Cushnie made an incredible score when a Falkirk toy store closed down six years ago: A full-scale model of a World of Warcraft orc. It's the sort of once-in-a-lifetime swag that most gamers, and especially Warcraft fans, would kill for. But Cushnie's wife, who he married in February 2009, wasn't quite so enthusiastic about it.

"It came down to the wife or the orc," he said. "She said there wasn't any room for him in our life. I've had him for six years but Dee means more to me, so he had to go."

Fortunately for all involved, Cushnie's orc was adopted by Michael and Patricia Thompson of Aberdeen. "We wanted him because he's so unusual," Patricia said. "Our grandkids love him."

As it turns out, the couple plan to move to Canada later this month anyway, minus the orc. "I'll miss him," Cushnie added, "but I'm glad he's gone to a good home."

Let this be a lesson to you, kids: Never get too serious with a woman until you've introduced her to the orc.