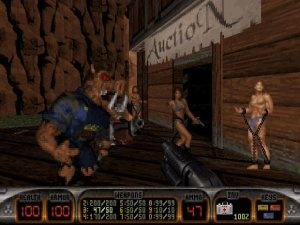 Jon St. John, best known as the voice of Duke Nukem, dropped some cryptic and facetious hints at MAGfest indicating that gaming's most famous piece of vaporware might not have evaporated after all.

You can't keep a good Duke Nukem down. Much in the same way that you can't keep a very determined zombie down - it may be a hulking, twisted abomination, but it's technically not down. Despite Duke Nukem Forever designers shedding light on the doomed project, sources indicated that DNF might still be in development.

Those rumors may be corroborated thanks to Jon "Come Get Some" St. John, the voice of the Duke himself. St. John showed up at MAGFest last weekend in Washington, D.C. as a panelist. When asked about Duke Nukem Forever during his panel, he said that he wasn't able to talk about the game, leading to a groan from the crowd.

But then, St. John continued with a proverbial wink of the eye (well, maybe an actual wink of the eye, I can't see his other eye when he says it), "No, no, don't be disappointed. Read between the lines. Why am I not allowed to talk about it?"

St. John then went on to display exactly why he was the voice of Duke, thanking the girl who gave him the can of Bawls he was drinking. Yes, Jon St. John, you do in fact have Bawls of Aluminum.

The video is up at Brave New Gamer, so we can all breathe a sigh of relief that Duke Nukem Forever may not be dead after all. Wait, is that relief? Sorry, that might have been exasperation instead. Yeah, definitely exasperation.

Gallery of the Day: 8 Things That Sunk Like The Titanic DrStrangelove 7 Comments
Comments on