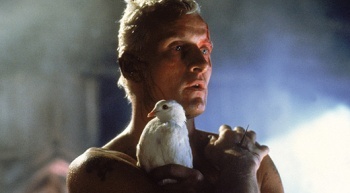 The family of late author Philip K. Dick is threatening to have its lawyers gouge Google's eyes out over claims that the new Nexus One smartphone violates trademarks established in the 1968 novel Do Androids Dream of Electric Sheep?, better known to the world at large as Blade Runner.

The name may not ring a bell with most mobile phone customers but Isa Dick Hackett, one of the author's daughters and head of Electric Shepherd Productions, is nonetheless unhappy with it. "We feel this is a clear infringement of our intellectual property rights," she said earlier this week. "Our legal team is dealing head-on with this."

The problem, according to Ms. Dick, is that the Nexus One name is a clear reference to the Nexus-6 replicants that featured in the novel Do Androids Dream of Electric Sheep? that ultimately became the basis for the cult classic film Blade Runner. Furthermore, the phone runs the Android operating system, which she says serves to reinforce the connection.

"[Google uses the] Android system, and now they are naming a phone Nexus One," she added. "It's not lost on the people who are somewhat familiar with this novel."

The case may be difficult to win, however. Marc Reiner of legal firm Dorsey & Whitney LLP said that characters like Mickey Mouse are much more likely to be protected as a trademark because they've previously been used in conjunction with other products. The estate will also have to prove that people are likely to think the novel and phone are somehow connected, he added, asking, "Will people buying the Google phone hear the Nexus One name and think that is just like in Do Androids Dream of Electric Sheep?"

When contacted for comment, a Google representative who wished to remain anonymous said, "Let me tell you about my mother."