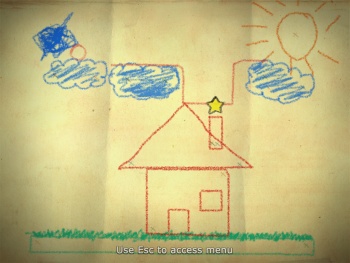 If you haven't picked up Crayon Physics Deluxe yet, now is the time.

Crayon Physics Deluxe is a 2D physics puzzle/sandbox game where players must manipulate the pieces of each level to collect a star. Drawing with the mouse creates objects that can form bridges, blocks, or other objects. As the game tells you, it's not about finding any solution, it's about finding the "awesomest" solution.

Finnish developer Petri Purho is holding this sale to celebrate Crayon Physics' one year anniversary. The Escapist's Jordan Deam even reviewed Crayon Physics when it first came out and called it "The first must-play game of 2009." Now it could be the first must-buy game of 2010 when it can be purchased at any price.

I have to admit something: I bought the game for only $1. I feel bad about it, but that's 100 times greater than what many people probably bought it for, so it could be worse. Don't be like me, pay more than $1 and avoid the inner turmoil that is now tearing me apart. Purho's sale is also a test to see how this type of model works compared to other indie developer 2D Boy's World of Goo pay-what-you-want sale, which was a huge success. I'll be interested to see how Crayon Physics does in comparison to World of Goo.