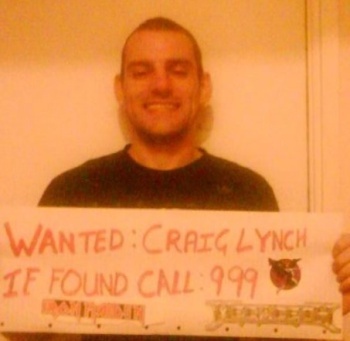 Craig "Lazie" Lynch, the escaped prisoner who spent his time on the run updating his Facebook page, has been captured.

A brief recap for those who missed it the first time around: Back in September 2009, Lynch escaped from Hollesley Bay, an "open prison" in the U.K. where he was serving out the end of his sentence. Why he felt the need to go on the lam when his freedom was imminent anyway is a bit of a mystery, but his conduct following the breakout makes it clear that he's probably not in any danger of landing on anyone's "Smartest Guy on the Planet" list.

Instead of lying low as you'd expect an escaped convict to do, he took the time to update his Facebook page on a regular basis. He taunted the police, talked about his disdain for MySpace and even his plans for New Year's Eve, and he also managed to build up quite a following among Facebook users, at one point having more than 27,000 people registered as fans of his Facebook page.

But Lynch's bid for freedom has finally come to an end: He was captured by police in Kent last night and has been charged with escaping from lawful custody. His Facebook page remains, but his personal profiles have been deleted; there also seems to be a bit of a backlash brewing, as the "Where Is Craig 'Lazie' Lynch?" page has filled up rather quickly with comments celebrating his arrest and asking where all the "idiot groupies" have gone.

Strangely enough, Lynch might actually have a "get out of jail free" card on this one, despite being on the run for several months: In July 2007 a U.K. court ruled that a prisoner who had failed to return from an unsupervised day pass from an open prison wasn't an escaped prisoner because he had not actually escaped custody; therefore, he could not be guilty of the offense of the "common-law offense" of escape from lawful custody. The circumstances may be different or the law may have been changed since then, but it's also possible, however unpleasant this is to consider, that our go-boy isn't quite as stupid as we thought.