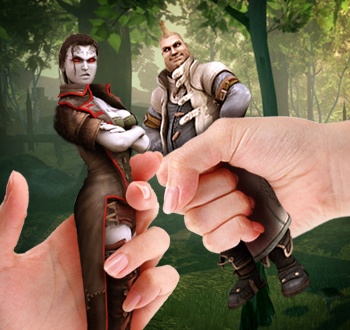 Games are often compared to movies in the kinds of stories they can tell, but the truth is they are two very different mediums.

Games and movies are both dynamic and visual, and they both have the potential to tell compelling stories. But the similarities end there. The experience of watching a film is passive; the nature of the audience has no bearing or control on how the images are portrayed. Games are the opposite, with the audience being able to directly manage and change what images it sees. So perhaps game designers should stop looking to what is a very different medium for storytelling cues and instead focus on the story that players tell themselves, as Dietrich Stogner explores in issue 236 of The Escapist:

Many gamers and forum dwellers pine for the day that we'll see the Citizen Kane of games, but I don't think any of us really know what it is we're asking for - we just know that we haven't reached it yet. Hell, I don't think we've reached the Weekend at Bernie's of gaming. But maybe we shouldn't be asking when we're going to see that type of storytelling in games. Maybe we should be asking if that's what we want in the first place.

Game writing is beginning to be honored as an integral part of the design, but at the same time, single player experiences are becoming devalued compared to multiplayer and online gameplay. Is it our responsibility, as the audience, to create the narrative in our play? Is that more or less valuable an experience to craft? Read the rest of The Stories We Tell Ourselves and let us know what you think.