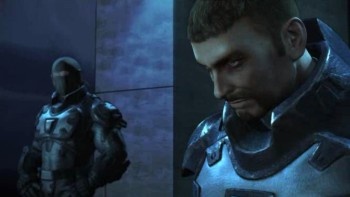 When it comes to hand-to-hand combat in your superhero games, you could do a whole lot worse than taking cues from Crackdown 2 are trying to do.

I believe that it's on the record that I freakin' loved the combat in Batman: Arkham Asylum. It was fluid, it was well-choreographed, and it was fun. So when I hear that Ruffian Games is using Arkham Asylum as a benchmark for the combat in its upcoming Crackdown 2, this makes me a happy gamer.

Speaking with VG247 in a phone interview, lead designer Billy Thomson said that Arkham Asylum was "probably a fair comparison" to what his team was trying to shoot for with the next Crackdown.

"Arkham Asylum is something we aimed at as a benchmark, because that does look and play really well," said Thomson, though he noted that his game shot for a wider scope of combat and so would likely not have the depth of games that focused solely on melee fighting like God of War.

"Batman: Arkham Asylum, I thought, was really well done from a hand-to-hand combat point of view. That's probably about as close as I would say our combat system is ... I mean, it's not as intense as that, it's not as deep... but ours is certainly as fluid as definitely as much fun, but it's not got quite as much depth as it's a very, very small part of the entire game."

I don't know if I'd describe Arkham Asylum's combat as being particularly deep, essentially boiling down to "Press Y to counter, press X to kick ass," but it sure was fun. More games with systems like it can never be a bad thing, and Crackdown 2 will be out in the first part of this year.