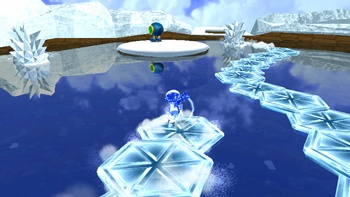 Let's get the record straight: I absolutely adored 2007's Super Mario Galaxy. It remains, to this day, easily one of my favorite games of the generation. Brilliant level design, great mechanics, and a wonderful sense of charm that other games that don't feature a pudgy plumber gleefully flying through space wide-armed simply don't have. So did plenty of other people, which is why it sold 4.1 million copies worldwide since its launch in November 2007.

But as it turns out, there's something to be said for familiarity, too: According to data from widely-trusted number-crunchers NPD group, New Super Mario Bros. Wii has sold 4.2 million since its launch in November 2009 - in other words, it's surpassed its big brother with two years to spare.

That makes sense, when you look at it. Many more people have Wiis now than they did when Galaxy came out, and there's something immediately recognizable about NSMBW's standard old-school platforming. It's probably a lot easier for a gamer or a parent to say "Oh hey, I remember that from when I was a kid!" and pick it up to play with family and friends like it was 19-freakin'-90.