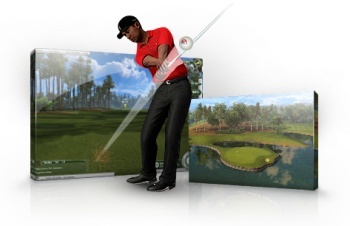 EA Sports President Peter Moore says that Tiger Woods' marital difficulties have had no effect on sales of the PGA Tour franchise and that he has no regrets about maintaining his company's sponsorship of the beleaguered golfer.

Few athletes have been pulled down from their pedestals faster than Tiger Woods, who in less than a month went from the world's most revered golfer to the butt of cheap late-night jokes and widespread scorn. Many of his major sponsors elected to distance themselves from Woods, even as Woods himself stepped back from the game of golf in order to rebuild what he could of his personal life, but EA Sports made it clear fairly early on that it had no intention of walking away from one of its most lucrative pitchmen.

Despite a rumor that surfaced earlier this month that EA might be reconsidering that position, Moore reiterated his support of the relationship between Woods and EA Sports in a recent interview with GameSpot, noting that regardless of what golf fans may think of his infidelities, game buyers don't seem too put off by it.

"We haven't seen an impact [on sales]," he said. "We looked at December sales and then we looked at the year as a whole. The situation with Tiger unfortunately happened over the Thanksgiving holiday going into the holiday selling period, but there was no degradation of sales we could see. Overall franchise sales for calendar year '09 were better than '08."

EA Sports, like everyone else involved with the game, is "very eager to see him [come] back," Moore added. "But it's going to be his call when he comes back."

Moore was also steadfast in his response to criticism of the continued corporate relationship with Woods. "Very simply, he's the world's greatest golfer until somebody tells me otherwise. The AP just a few weeks ago called him the greatest athlete of the decade," he said. "If you're talking golf, you have to have Tiger Woods as the first name that comes out of your mouth on that."