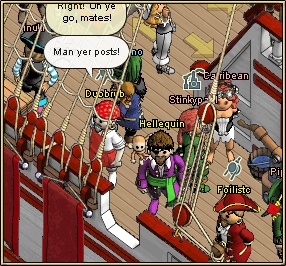 Daniel James, CEO of Yohoho! Puzzle Pirates maker Three Rings, admits that the rise of Facebook as a gaming platform took his company (and him) completely by surprise.

We live in a world of corporate speak, where even a major setback has to be spun in positive language lest company shareholders lose confidence and stock prices plummet. The vast majority of game studio executives are usually on tight leashes about what they can and cannot say - which is why honesty and frank admission of failure is so refreshing.

In a blog post discussing the state of his company's games - the popular Puzzle Pirates and beyond - Three Rings CEO Daniel James discussed the meteoric rise of Facebook gaming like FarmVille et al, and admitted that it had "blindsided" him.

The last year has been a challenging one for the company and for me personally as glorious leader ... Three Rings is getting better at adapting and learning fast, and that's exciting, but it's still tough to be wrong - and occasionally to shed a tear for spilt milk. In my case, the incredible rise of Facebook as a platform for games blindsided me, and I spent time trying to build a social network just when I should have been hopping onto theirs. I also failed to test the assumptions behind my grand experiment sufficiently until we'd over-invested in those hypothesis.

In all fairness to James et al, it would have been difficult to see just how big games like Mafia Wars and FishVille would become before they, um, got big - but mistakes do happen. He does close on a positive note, saying that the Three Rings team is learning rapidly and gets to try again in 2010 - and that they're still around, unlike Raph Koster's Metaplace.

Still, it can't be tasty to eat crow and make an acknowledgement of failure like that. But you know what they say, Daniel - admission is the first step to recovery, and there must be plenty of other casual game-makers in that same boat who are still keeping mum. Good luck, eh?