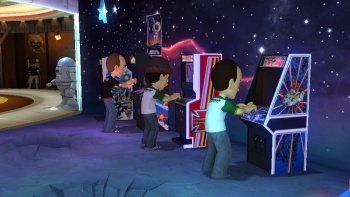 If you've already bought Tempest or Centipede on Xbox Live Arcade, forget about transferring them to Microsoft's Game Room when it launches later this year.

Microsoft revealed Xbox Live's Game Room at CES earlier this month, a virtual retro arcade that users can decorate and personalize. That is, if they put out the dough. Microsoft has told Game Informer that any game purchased through Xbox Live Arcade that is also available in Game Room would not transfer over. To play the same game in Game Room, it will have to be purchased again.

Microsoft posits that Game Room games are different because they're the original versions, not the "revamped" Xbox Live Arcade versions. The lack of anti-aliasing evidently demands buying a game all over again. In other words, Microsoft and the rights holders of classic arcade games have found a way to suck even more money out of Xbox Live users.

This positions Game Room as yet another special marketplace on Xbox Live, which should confuse a good amount of customers. It will be its own little store, separate from the rest of Xbox Live. Game Room does appear to offer a few unique competitive features in addition to the customizable arcade room, but this just doesn't seem right. If someone has already put out the money for a classic game through Xbox Live Arcade, it should be available in Game Room, a parallel Xbox Live service.

It's almost pathetic in a way. Game Room might be different from Xbox Live Arcade to Microsoft, but to consumers both services can be switched between with the press of a button. Not that this is that big of a deal, with Game Room games only going for $3 to $5, but Tempest and Centipede already go for $5 anyway on XBLA. It seems like Microsoft should do the right thing here.