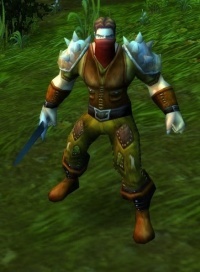 Instead of figuring out how many hit points the end boss has, machinima-ists are deciding how to incorporate it into their tales of epic adventures.

If you've ever wanted to see what would happen if Survivor and World of Warcraft combined, there's a machinima of that. Wish Dr. Kleiner of Half Life fame had a science show? There's a machinima for that, too. Since the debut of the first widely received "Diary of a Camper" Quake machinima in 1996, players have created thousands of machinima featuring their favorite games and characters, and their community is growing ever stronger. In Issue 134 of The Escapist, Cat Rambo takes a look at the evolution of machinima:

Machinima, a combination of "machine" and "animation," are videos made using clips of game animation recorded by players, rather than created with professional animation software. Some machinima feature music or comedy, while others focus on an ongoing narrative. They're wide spread enough to merit their own YouTube channel, as well as the inevitable Machinima for Dummies book. They range from sublimely funny to heart-wrenching, amateurish home-movies of gameplay to complex, sophisticated productions. They appropriate game content to new, unexpected purposes and intriguing narratives capable of commenting on the nature of the virtual world.

Having participated in a machinima, I can tell you from personal experience that they are hard work. A 3 minute film can take up hours of time spent in the gaming world, posing your character correctly, waiting for cues to say your lines - but the effort is almost always worth the end result. Read "Hey Kids, Let's Make a Movie:Machinima" and share your favorite machinima and your own experiences with the medium with us!